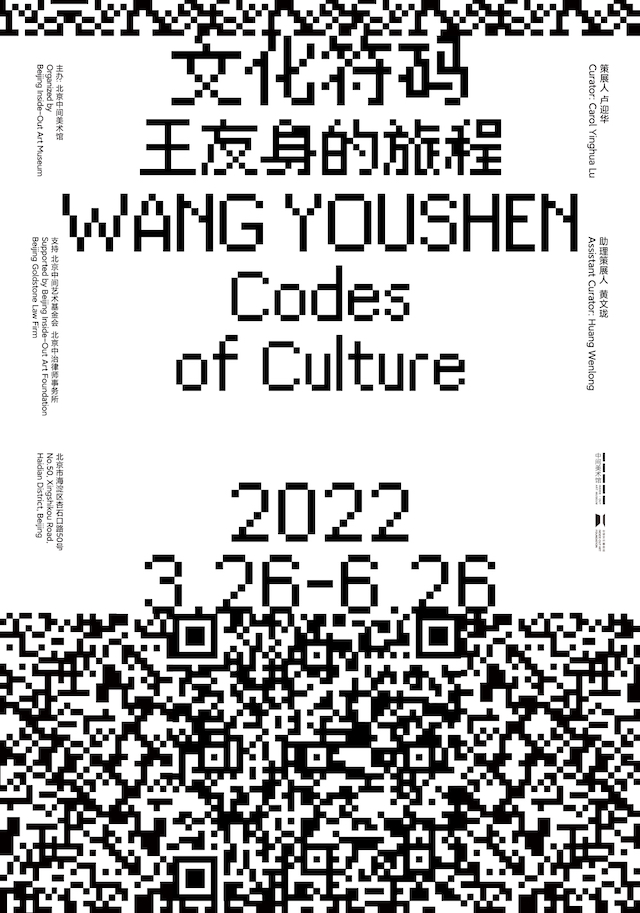 The exhibition “Wang Youshen: Codes of Culture” brings to the public for the first time the overall body of artistic experiments and practice of Wang Youshen, an oeuvre spanning more than three decades. Born in 1964, Wang Youshen has been active in making conceptual art since 1989. The exhibition showcases 40 groups of works of different mediums and provides a comprehensive survey of the social issues and personal concerns that inform the artist’s practice. It unravels how the artist engages with the issues and concerns through a wide range of mediums and experimentation of form. The exhibition approaches Wang’s artistic career from two perspectives: “From the Removal of Meaning to Meaninglessness” and “From Image Processing to Image Disintegration.” It aims at presenting a detailed and in-depth investigation into Wang’s practice. This exhibition is a much-needed mid-career retrospective of the artist.

In 1988, Wang Youshen graduated from the Central Academy of Fine Arts with a degree in Comic Drawing. Right after that, he got a job at Beijing Youth Daily. The newspaper publisher has played a key role at the heart of press reform in the wake of the furthering of Reform and Opening-up policy. Since the 1990s, the values upheld by the paper, the establishment of its institutional structure, as well as its editorial content have echoed the open and innovative spirit of the time. Wang Youshen was deeply involved and became an experienced professional in the media industry. In the meantime, his art practice ran in parallel with his work at Beijing Youth Daily. In both, he’s stayed acutely alert to the trajectory of individual lives and the instantaneous changes of the society, which he’s captured and questioned in his artworks. It’s no surprise that Wang Youshen considers art as a means to record and reflect on the time he’s lived in and its people.

Wang Youshen’s art has evolved alongside the historical process of contemporary art in China since the second half of the 1980s, while developing a distinctive presence of its own. At the beginning of his artistic career, he witnessed the widespread discussion of Pop aesthetics and semiotic theory in the Chinese art world. Catching the tail of such a discussion, Wang Youshen worked with methods of collages and repetition to create a series of head portraits that appeared akin to a series of identical signs.

In the early 1990s, on one hand, the renewal of artistic mediums was considered a signature of being contemporary and global by the Chinese art community. In practice, it was translated into a phenomenon in which a certain medium such as painting was considered a lesser form while installation and video for example, were considered a more advanced form. On the other hand, the artistic perspective on the society and life was leveled back to one’s immediate surroundings and individual beings in one’s life, as opposed to the heavy metaphysical tendency in thinking of the 1980s. Wang Youshen was a member and a promotor of the so-called “New Generation” (Xinshengdai) artists in Beijing at that time.

In the early 1990s, the Cultural Fever (Wenhuare) spawned by the Reform and Opening-up of the 1980s had undergone a process of institutionalization and grown into a disciplinary, in which both players and institutional structures were taken into account. It led to a resurgence of cultural studies. Since the 19th century, the issue of culture has always been a central concern of Chinese intellectuals, which points towards the relationship between Chinese culture and modernization as well as the future. It means that culture is primarily a spirit, a system of values.

Cultural studies of the 1990s primarily approached a series of specific contemporary issues as cultural issues. At the center was cultural production as a part of the process of social reproduction. Cultural studies were concerned with the connection between contemporary lives and all kinds of elements, well beyond the scope of textual analysis. Cultural studies in this sense dealt with economic processes, politics and governance, as well as cultural values, putting these different facets together and textualizing the whole range of social life. Against this background, Wang Youshen’s works from the 1990s onwards bear the marks, consciousness, and methodology of cultural studies. The range of social life and issues have also been the subject of his observation, representation, and reflection.

Mass media, popular culture, and print culture were among the cultural issues that received considerable attention in the 1990s. Through marketization, mass media were given a greater degree of freedom and occupied a significant place in the space of social discourse. Under the spotlight of the media, many social phenomena were reported and discussed, and in turn, acquired cultural significance. Wang’s post at the Beijing Youth Daily gave him a practical platform with leeway for proactive actions. Not only did he bring coverage of contemporary art and conceptual art practices into the pages of the paper, hence giving them greater visibility. He also continuously engaged with the media industry’s relation to the landscape of social life in his artworks. While being the platform for his presswork and creative practice, Beijing Youth Daily provided first-hand sources for his artworks as an example of the media industry. This has cultivated a relationship between his works and the urban life and popular culture since the 1990s that is closer than “close proximity (Jinjuli).”

As a direct participant of the media industry phenomenon himself, Wang Youshen has problematized and visualized the mechanism of the propagation of news and images from the perspective of cultural studies. His practice tackles current issues and social phenomena such as the pertinent debate of the rise of mass media in social life, and how it shaped the ideology of the public. He also used the methodology of cultural studies to visually encode the problematics, which implied his self-awareness of his participation in such a historical progress.

Being at the forefront of the society and in the backstage of media production, Wang has had an unquenchable urge to both create and dissolve images. This was also reflected in his works. In his practice, he constantly alternates his positions between that of the image producer, the image consumer, the image skeptic, and someone who deconstructs images. Such conflicting yet co-existing viewpoints have generated an important tension in his works.

During the 1980s, artworks were presented in name of artist groups, accompanied by manifestos. Individual voices, however, returned to the stage from 1987 onwards. The shift towards individual expressions and subjects more immediate to individuals found its way into Wang Youshen’s series of works that gazed at friends and family. Since then, the artist has continued to develop different forms of expressions for his personal memories and states of mind throughout various stages of his life.

In the late 1980s, a conceptual dimension began to emerge in artistic practice in China. In response, some artists adopted an essentialist view of art, emphasizing artistic and formal languages, as a way to reject constraints set on art by state ideologies. Some artists simply understood “concept” as coming up with ideas or resistance to establishments, which even led to nihilistic life mottos. Early in the formation of the conceptual vein, Wang Youshen had participated in founding a conceptually accentuated photography group. Although Wang also adopted conceptually oriented methods, he turned towards concrete life experience, specific historical time and space. As a result, a dynamic and deep humanistic concern has taken roots in his works.

The humanistic discussions among Chinese intellectuals in the early 1990s are echoed in his works. Some of his works reflected his perception and somberness towards the passing of life and memory or a despondence towards a determined future. These deep reflections on individual life have constituted the intellectual core of his art.

Since the 1990s, Wang’s artistic career has had many cross-overs with the globalization of Chinese art. He has exhibited multiple times in Western Europe, North America, and South America. The exhibitions were mostly group and thematic shows about China. Nonetheless, due to his inclination towards specific issues and personal experience, his works have distinguished themselves from those artworks by Chinese artists of this period featuring solidified superficial icons, repeatedly interpreted by cold-war ideologies in the early 1990s. Subsequently, his works could not be as easily consumed by the art market and mass media. Historically intertwined yet undogmatic, the art practice of Wang Youshen should be of particular interest to serious art historians and institutions in their efforts to write and understand contemporary Chinese art history.

Since the organization of the exhibition “Discordant Harmony” in 2017, the Inside-Out Art Museum has launched a research on the 1990s through studies of specific regions and artists. This exhibition on Wang Youshen is part of such a historical research and is curated by Carol Yinghua Lu, art historian and director of the museum. As studies of individual cases can lead to the formation of laws, thoughtful individual case studies will assist us in loosening, or even subverting existing historical impressions and narratives. We can then perhaps develop a more truthful and nuanced understanding and narration of our own via the vein of contemporary culture and thinking in China.

At the same time, Wang Youshen has worked in Beijing Youth Daily for 30 years from 1988 to 2018 and served as art editor, art director and other positions. All along, Wang Youshen has dual identities, working between the art world and the media world. He committed to investigating and loosening the rigescent boundaries between art/life, art practice/daily life.

Wang Youshen has his unique way of understanding and intervening in the duality of official/civilian, professional/amateur, art/reality, etc., which allows him to use the resources of two different systems to generate the possibilities of knowing himself and the surroundings. Wang Youshen presents us with the intensity, continuity and richness of an artist’s practice. His practice is not only reflected at the level of artworks, but is constantly re-examining one’s potential and limitations, and exploring possible forms of dialogues between art and the self, art and the world.