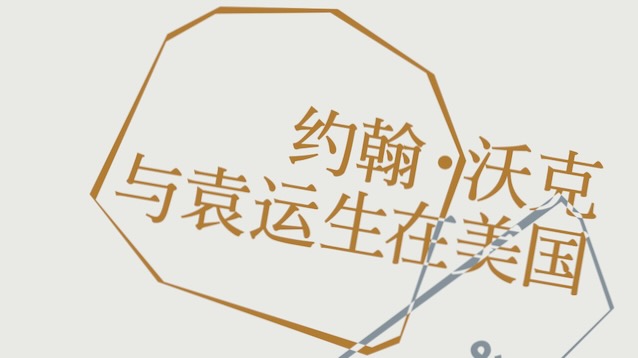 Upcoming Exhibition | John Walker & Yuan Yunsheng in the US

3 Floor
John Walker and Yuan Yunsheng in the United States 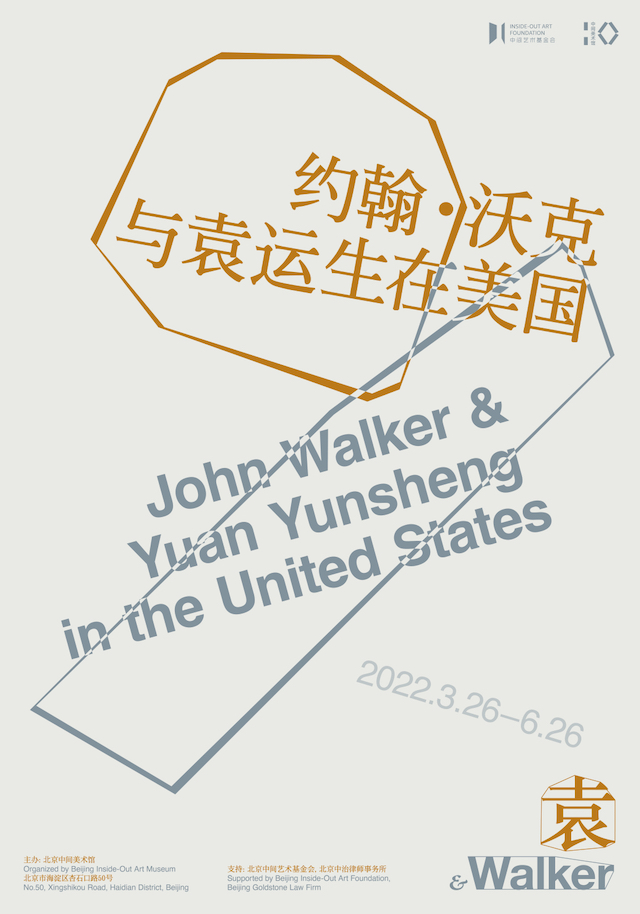 in the United States

“John Walker and Yuan Yunsheng in the United States” is the first exhibition of a series of events celebrating the 10th anniversary of the Beijing Inside-Out Art Museum. This small display focuses on John Walker from the UK and Yuan Yunsheng from China, two artists with whom the Beijing Inside-Out Art Foundation maintains long-term dialogues. Both Walker and Yuan chose painting as their life-long commitment, and both their careers have spanned more than six decades. Meanwhile, they grew up in different post-war societies, and great differences lie in the art education they received, cultural ideals they uphold, ideological contexts in which they create, and artistic styles rendered on their canvases, thus placing them in two disparate branches in art history.

John Walker was born in Birmingham, England in 1939. John Constable, the 19th-century English landscape painter, was Walker’s introduction to art. Constable, who focused on England’s ever-changing landscape, believed that direct observation of nature would result in more realistic and vivid paintings than copying after classical landscapes, and his works later inspired innovation in French landscape painting as well as Romanticism. Walker painted with acrylic in his early years. Influenced by abstract expressionism and post-painterly abstraction, he combined apparently three-dimensional shapes with “flatter” elements. 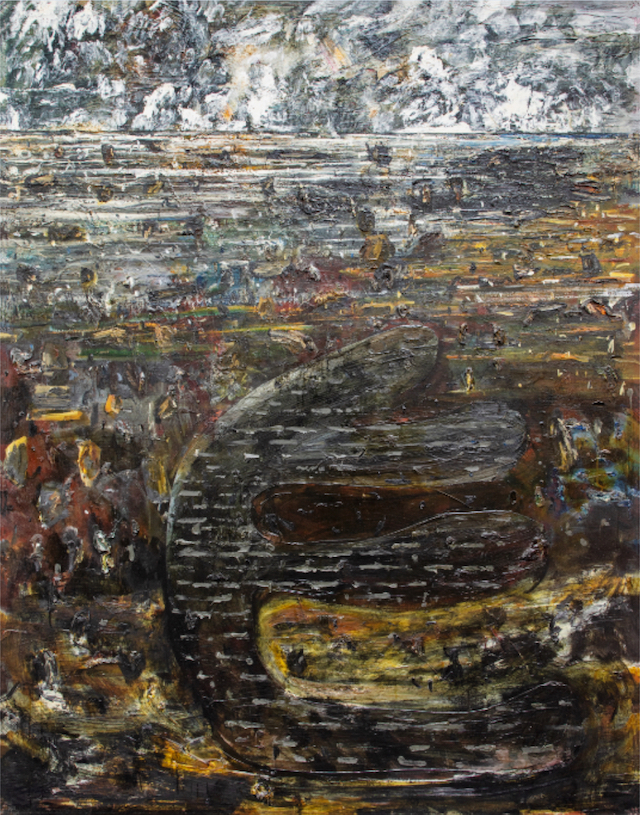 In the early 1970s, he produced a series of large chalk works on the blackboard. Beginning in the late 1970s, he drew on artists such as Francisco Goya, Édouard Manet, and Henri Matisse both in terms of subject matter and painting techniques. During this period, Walker began to use more oil paint while applying glued-on, separately painted patches of canvas to the main canvas. In these experiments, he introduced shape, materiality, and flatness into his works, while subtly retaining traces of painting, especially expressive brushwork. These explorations put him at the forefront of post-war Pop and mixed-media practice, and his works made frequent appearances at major exhibitions. In 1969, Walker received a fellowship to study in Manhattan, New York, and he has been associated with the American art scene ever since. By that time, the center of modern and contemporary art had shifted from Europe to the United States; minimalist art and post-modern ideas dominated the American art scene then. There, expressionism, which originated in Europe, had been internalized and translated into multiple forms of exploration, constantly expanding the agency and boundaries of art. Shortly thereafter, Walker chose to reside in the US, where he taught and continues to make art. For a period of time in the 1980s, he lived and taught in Melbourne. Subsequently, native Oceanic art has left its mark on the development of his visual language. 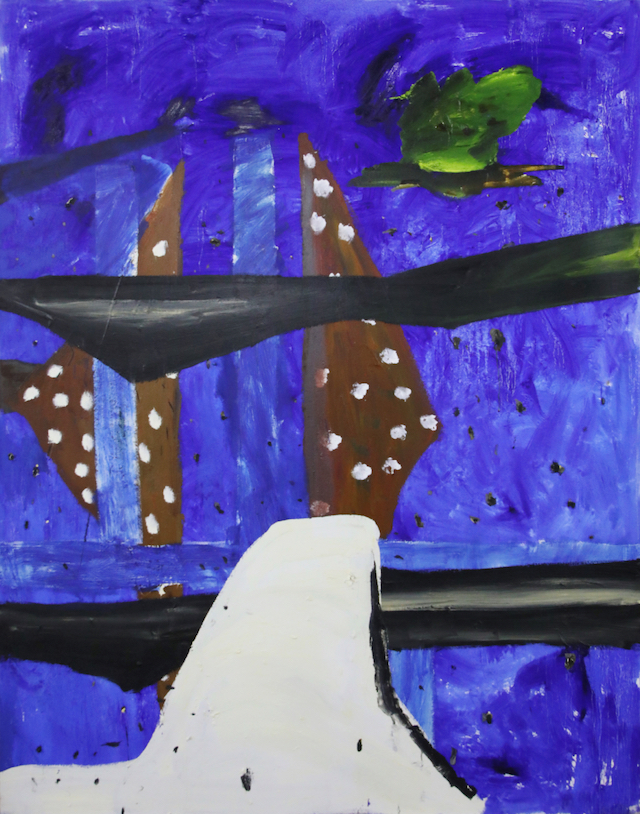 A peer of Walker, Yuan Yunsheng was born in 1937 in Nantong, Jiangsu Province, and grew up in post-war China. He studied Chinese painting in his childhood. His initiation into the world of oil painting occurred in 1952, when the fifteen-year-old Yuan was tasked to paint the portraits of Marx, Engels, Lenin, and Stalin for the main hall on the second floor of the Cultural Palace of Nantong. In 1955, he was admitted to the oil painting department of the Central Academy of Fine Arts and studied realism under artists including Wei Qimei, Li Zongjin, and Dong Xiwen. In addition to visiting the Palace Museum’s painting collection with Li Keran to improve his knowledge of ancient painting, Yuan also attended lectures by the Mexican muralist David Alfaro Siqueiros, who visited China in 1956. Through books and catalogues, he learned about various styles and movements, including Western classical painting and modern art in the West such as Impressionism and Cubism.

As a student, Yuan made continuous efforts to paint from nature, explore color and form, while demonstrating his extraordinary talent for painting on many occasions. He spent his winter break in 1962 copying Chen Hongshou’s Bogu Leaves, a series of line drawings with the traditional ink and brush method. To prepare for his degree project, Yuan stayed in an old town in Suzhou’s suburb to experience the local life, observing and reflecting day and night, and ruminating on his copies. His use of color and line is spontaneous: he applies colors where he sees fit; if lines seem more becoming, he would discard color and emphasize the lines’ structure. 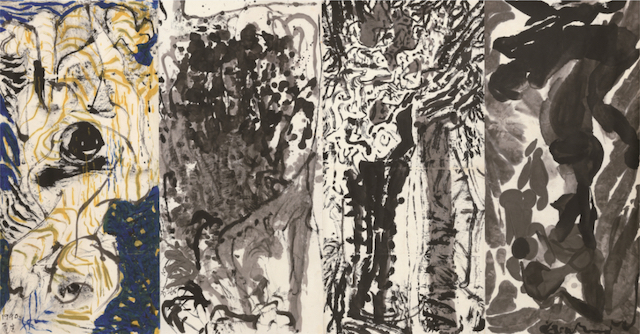 In 1978, Yuan was invited to Xishuangbanna Autonomous Region in Yunnan Province, where he spent five months collecting materials for his paintings, which led to the creation of a number of extraordinary black and white line drawings. In 1979, at the Capital International Airport in Beijing, he created the mural Water-Splashing Festival: An Ode to Life based on his fieldwork in Yunnan. This colorful and decorative work is an iconic example of formal exploration in the context of “Emancipation of the Mind,” combining the diverse art forms since the founding of the PRC in 1949 with Yuan’s knowledge of folk and traditional art. Yuan joined the Central Academy of Fine Arts in 1980 as part of the team to establish the school’s new fresco department and conducted fieldwork on traditional Chinese frescoes. In 1982, he was invited to Washington, D.C., following which he resided in the US for fourteen years until his return in 1996, when he assumed directorship of Studio 4 of the Oil Painting Department at the Central Academy of Fine Arts. 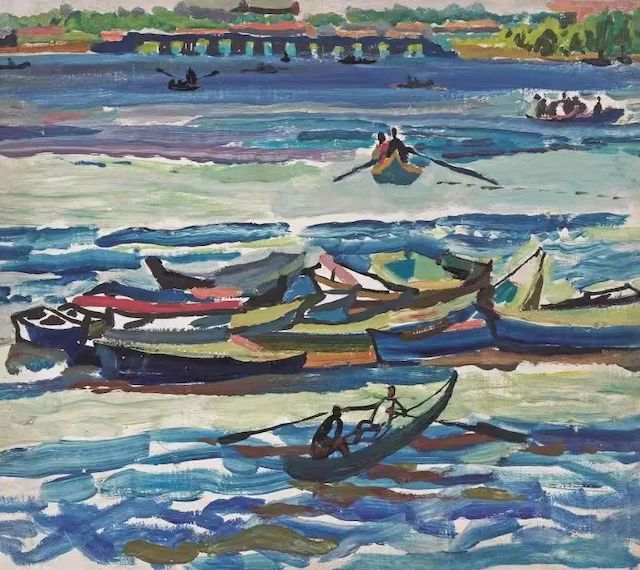 Presenting a tip of the iceberg in both artists’ careers, this modest show focuses on works from their time in the US. In addition to the small oil painting Summer Palace from 1960, the exhibition also features four large works on paper by Yuan that he completed in the US in the 1990s (one of which, despite its title Completed in 2015, was actually painted in the 1990s). 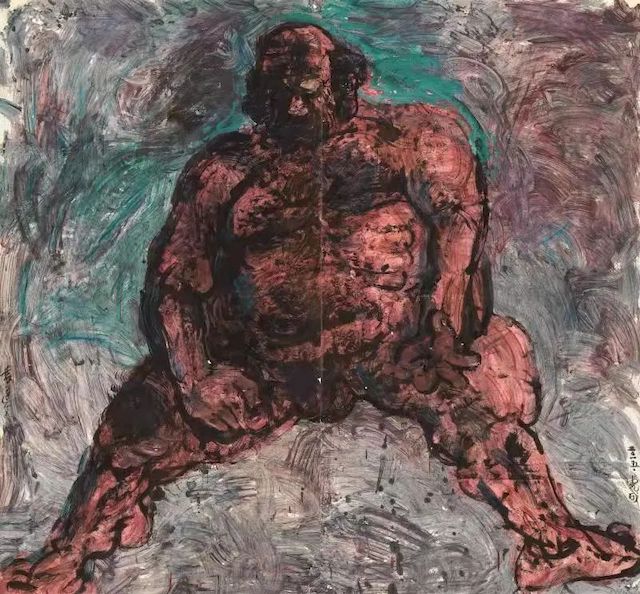 Although Yuan was trained in oil painting, he has always been fascinated by ink painting. His stay in the US opened the world of abstract expressionism and action painting to him, which prompted him to create large-scale mixed-media works. Due to language barriers, for subject matter he mostly relied on his artistic experience and cultural ideals prior to his arrival in the US, sourcing his inspirations from Chinese mythology. During this period, he created a large number of ink-on-paper works. Owing to his love of traditional Chinese frescoes and his admiration for the Mexican muralist Diego Rivera, these works often depict legends and mythologies, with figures suggesting primordial gods. Full of visual intensity and distinguished by their expressionistic language, these exuberant works are imbued with a fresco-like majesty. 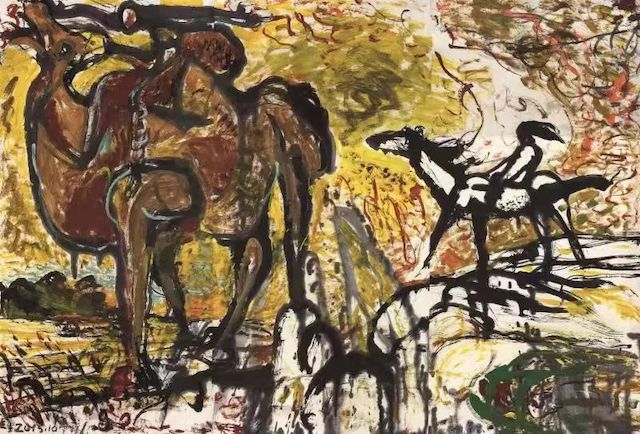 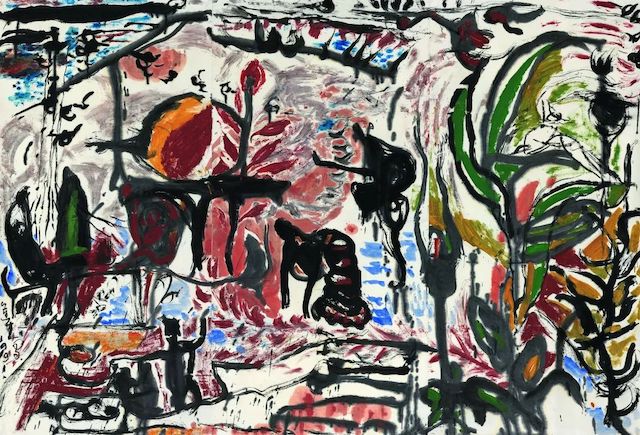 Walker’s transition from abstract to landscape painting, an important turning point in his career, is linked to his return to the US from Australia in 1989 and his decision to settle in the northeastern state of Maine. At Maine’s Seal Point, he enjoyed a sweeping view of the Atlantic. In 2000, Walker busied himself with retracing his father’s experience as a soldier in WWI and studying the war’s history. As he looked over the mudflats from Seal Point, his mind would travel to the autumn battlefield of Ypres where cannon blasts and heavy rain tossed up mud in monstrous shapes. Thus, from the surface of tidal mud on Maine’s shore, Walker saw pristine material constantly reshaped by tides and light, a scene by no means picturesque or poetic. In this way, the view of tides from Seal Point became a recurring theme in his works. 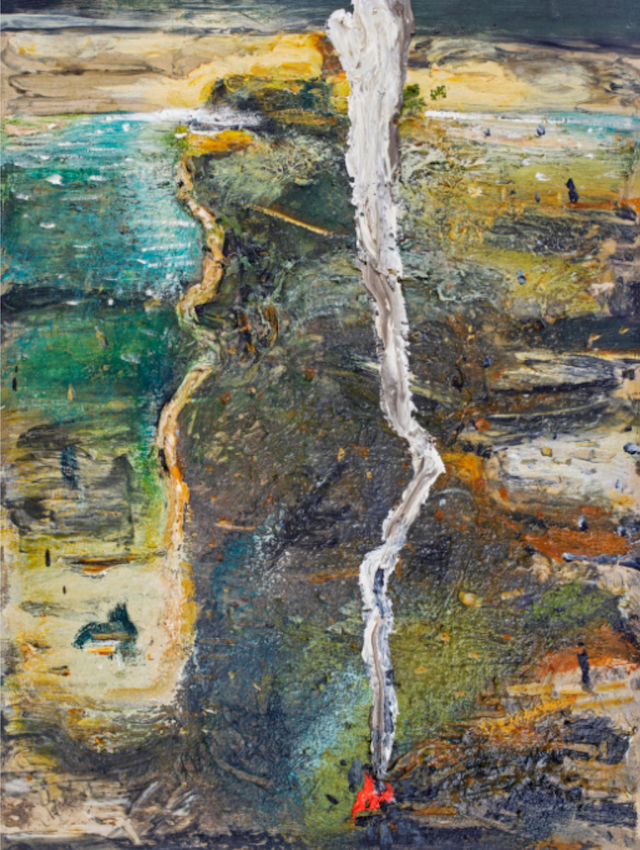 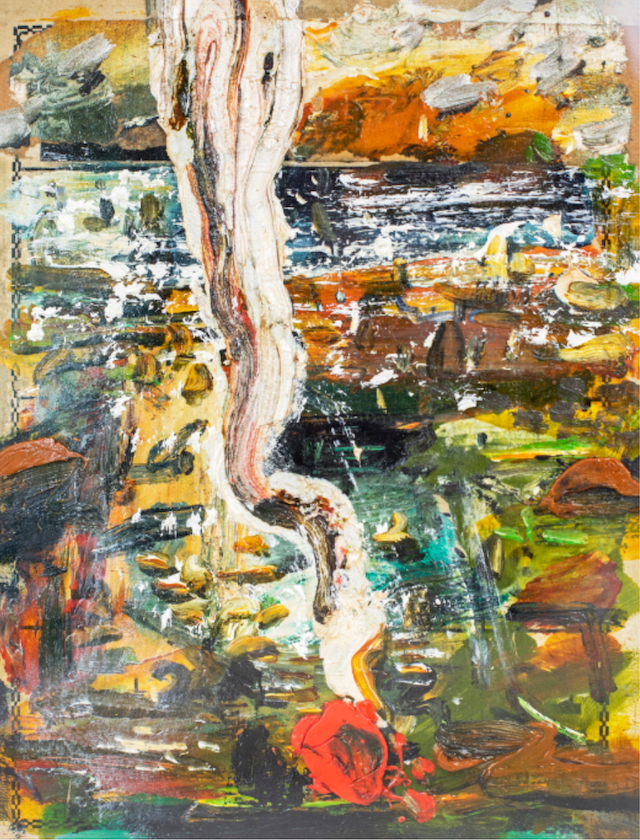 Although the vantage point remains the same, endlessly changes in the natural landscape, in different seasons and times of the day, give endless possibilities to his paintings. In the visual expression of these works, Walker again mobilized experiences and formal language from different stages in his earlier career, especially the use of overlapping colors. His neutralizing treatment through toning oil brings rich layers, details, and complexity onto the canvas. Quiet, subtle, sophisticated, these paintings merit a copious amount of contemplation. This exhibition features a series of landscape paintings of various sizes that Walker created around 2005. 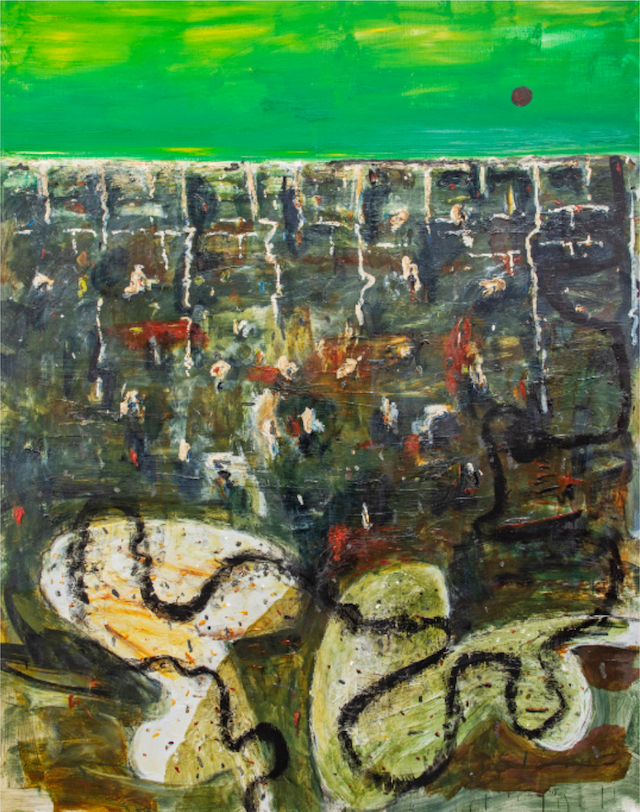 Walker and Yuan, both born in the late 1930s, arrived in the US at a stage when their artistic careers were beginning to take shape. Their talent had already been shining brilliantly in their respective country’s art scene prior to their departure for the US. The two artists had met and conversed in the US and in China, yet this is the first time their works are in dialogue with each other. Their practices are representative in a certain sense, each showing us a glimpse of the branches of art history that grew out of two disparate ideological structures during the Cold War.

He has taught at the Royal College in London and at Yale University. In the 1980’s he was Dean of Victoria College of Art in Melbourne, Australia. From 1993 to 2015, he taught at Boston University. His work can be found in museum collections. He has had solo exhibitions at the Museum of Modern Art in NY; The Phillips Collection in DC; The Tate Gallery, London; The Hayward Gallery in London; The Kunstverein, Hamburg; The Art Gallery of New South Wales in Sydney, Australia; and others.

Yuan Yunsheng, born in Nantong, Jiangsu Province in 1937, graduated from The Third Studio directed by Dong Xiwen, oil painting department, Central Academy of Fine Arts (CAFA) in 1962. In 1979, he participated in making mural paintings for Beijing Capital International Airport and taught in the Mural Department of the Central Academy of Craft Art and CAFA. The line drawing figure paintings of Yunnan Xishuangbanna and the large-scale mural of Water Splashing Festival – Praise of Life at the Capital Airport have attracted the attention of the art and ideological circles. In 1982, he was invited to visit the United States until 1988 and taught at Tufts University, Massachusetts University, Smith College, Harvard University. In September 1996, he was invited to return to China and taught in the fourth studio of the Oil Painting Department of the Central Academy of Fine Arts. He undertook the research work on the subject of “Reproduction of Chinese Traditional Sculpture and the Establishment of Contemporary Chinese Art Education System”.

Tags: John Walker & Yuan Yunsheng in the US