HomeInside-Out Practice | Conversation with Zheng Shengtian: the Story of Yishu 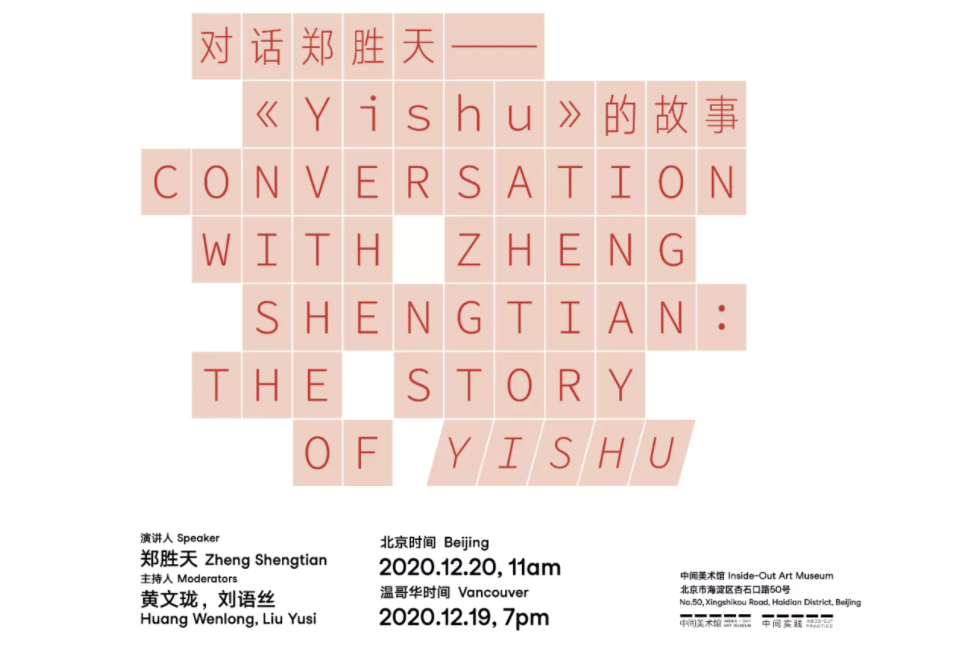 Inside-Out Practice | Conversation with Zheng Shengtian: the Story of Yishu

Beijing Inside-Out Art Museum “Inside-Out Practice” presents From Art to Yishu, From Yishu to Art (2020.12.19-2021.3.19), a retrospective of the publishing history of one hundred issues of Yishu. From the abstract and all-encompassing concept of “art,” to the practical work of the journal’s viewpoints, editing, writing, and publishing, all of these specific aspects of the journal have enriched our understanding of art.

Mark your calendar! We are glad to have invited Zheng Shengtian to share his nearly 20-year journey working with Yishu this weekend. The Founding Managing Editor of the journal, Zheng Shengtian, is a Chinese-Canadian artist and scholar who has resided in Vancouver since 1990. He has been a leading figure in promoting Chinese and overseas Chinese artists across the world, and especially in North America. Chinese-Canadian artist Ken Lum served as Yishu’s Founding Editor-in-Chief from its inauguration until 2004. Thereafter, Canadian curator and art writer Keith Wallace took over as Editor-in-Chief until 2020. A series of events will follow the opening of this exhibition. We will invite Ken Lum, Keith Wallace, and Yishu‘s frequent contributors to share their experience: why did they choose to write about Chinese art, what are their writing experiences, and how were their collaborations with the editorial team like? We hope to get a comphrehensive picture of the community Yishu has fostered.

Zheng Shengtian is an artist, scholar and curator based in Vancouver, Canada. He is the Managing Editor of Yishu: Journal of Contemporary Chinese Art, the Adjunct Director of the Institute of Asian Art, Vancouver Art Gallery, a Research Fellow at Simon Fraser University and a Trustee of Asia Art Archive in America. In the 1980s he taught at China Academy of Art in Hangzhou as Professor and Department Chair. He was also a visiting professor at the University of Minnesota and at San Diego State University. Since immigrated to Canada in 1990 he was the Chairman of Chinese Canadian Artists Federation in Vancouver, the Secretary of Annie Wong Art Foundation and co-founder of the Vancouver International Centre for Contemporary Asian Art (Centre A). As an independent curator, he has organized and curated numerous exhibitions including Jiangnan – Modern and Contemporary Chinese Art Exhibitions, Shanghai Modern, the 2004 Shanghai Biennale, China Trade, Art and China’s Revolution, Landmark and recently, Winds from Fusang toured to USC Pacific Asia Museum in Pasadena and the Diego Rivera Mural Museum in Mexico City. He was the senior curator for Asia of Vancouver Biennale and won the Lifetime Achievement Award for his curatorial work. He is a frequent contributor to periodicals and catalogues and four volumes of his writing on art and culture were published by China Academy of Art Press in 2003. He has lectured widely at institutions including Harvard University, Columbia University, Princeton University, Stanford University, McGill University, Tate Modern, Getty Museum, San Francisco Asian Art Museum, M+ among others. His artwork has been shown in China, USA, Canada and Russia. Zheng received an Honorary Doctorate of Letters from Emily Carr University of Art and Design in 2013.